What is Religious Fundamentalism?

Fundamentalism is the approach to religion that sees believers embrace an early form of their religion, to consider it beyond criticism and worthy enough to be enforced upon oneself (or others) without having to accommodate modern evidence or logical arguments against it1. Sociologist of religion David Lehman describes "fundamentalist religious globalization" as the way fundamentalists establish themselves in a new culture "without acknowledging this new culture"2. This contrasts against other religious migrants who normally change and adapt to a new culture. Richard T. Antoun adds the phrase totalism to the picture: "the religious orientation that views religion as relevant to all important domains of culture and society"3. Steve Bruce divides fundamentalism into two distinct types: (1) communal (giving Middle-Eastern Islam as an example) and (2) individual (giving strict Protestant conservativism as an example)4.

Fundamentalists of text-based traditions treat a core holy text as infallible and inerrant5,6 - for example in Islam the scribes who eventually wrote down Muhammad's recitations wrote that it was not Muhammad who wrote the Qur'an. They said that he merely recited the copy of it that Allah created in Heaven. Aside from Abrahamic religions other textual traditions encompass communities that fall into the same traps - "conservative Sikhs share the same abhorrence of modern textual interpretation and exegesis as Protestant Christian fundamentalists", writes one sociologist7. Fundamentalism is often sectarian and intolerant8 - because precise values are adopted so strictly every possibly interpretation of (vague) original ideas will result in two sides who stake their entire religious outlook on the fact that their interpretation is correct9. So fundamentalism is often seen as violent, intolerant, stubbornly backwards and inhuman. Such religions often try to control ideas and restrict free speech through blasphemy laws - Neil Kressel in his book on religious extremism lists "prohibition against blasphemy" as one of the three most dangerous manifestations of organized religion10. Religious extremism often involves an obsession with controlling female sexuality11. These traits all arise because the 'fundamentals' of a religion are held to be those morals, behaviours and beliefs held by the earliest followers, hence, fundamentalist ideas clash with modern society, clash with modern evidence and knowledge, and clash with modern tolerant morality.12

Usage of the Word 'Fundamentalist'

The word fundamentalist was first used to describe some Protestant sects6 from the early 1900s who resisted modernity13. Curtis Lee Laws, editor of Baptist magazine Watchman-Examiner in 1920, encouraged fellow conservatives to rally under a new label, and wrote "we suggest that those who still cling to the great fundamentals and who mean to do battle royal for the fundamentals shall be called 'Fundamentalists'"14. He wanted "to create distance from the negative connotations of the word 'conservative', but since then fundamentalism soon became defined as a very extreme form of conservatism"12. Talk of a return to the 'fundamentals' of religion had been around for some preceding decades, although of course throughout all time, there have been groups and peoples who have been fundamentalist in the modern use of the word12. In the early 1970s 'fundamentalist' was used to refer only to those groups that also engaged in political or militant behaviour12 and for a while the term looked set to exclusively refer to Islamic groups6. Used farily, the word can describe any community of any religion. Karen Armstrong in "The Battle for God: Fundamentalism in Judaism, Christianity and Islam"15 writes that fundamentalism "is a useful label for movements that, despite their differences, bear a strong family resemblance".

Knowing the ambiguities, many academics are wary of the word. Torkel Brekke of the University of Oslo thinks we should only use it to describe movements that oppose modernity, and therefore only groups that have arisen after 1800-1850 CE16. It has instead grown to describe a huge variety of religious groups, often simply being a code-word for "a group we don't like"6, like the word "cult". Some notes from Steve Bruce, the sociologist of religion:

“A sensible response to such promiscuous usage would be to drop the term altogether. Elias (1999: 86) notes that, seen in one light, all Muslims would have to be described as fundamentalist. [...] Although I accept all the reservations about 'fundamentalism', the term is now so firmly established in common parlance that we are unlikely to dissuade people from using it. Anyway, as Marty and others have suggested, there are enough common features in many fundamentalisms to justify pressing on with its use.” 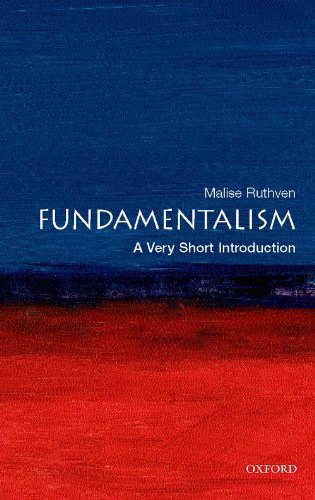 Terrorism and fundamentalism are not synonymous. There are many fundamentalist groups that are completely free from any hints of terrorism; for example Amish Christians and Jehovah's Witnesses. And there are many acts of terrorism that are more likely sourced from insanity than personal religiosity. Often, a group's religious identity is not truly the main impetus behind acts of illegal violence. So be warned not to confuse all religious violence with terrorism.

“Similar tensions between ideological purists [... and] realists [...] in all political and cultural movements. [...] Virtually every movement, from animal rights to feminism, will embrace a spectrum ranging from uncompromising radicalism or extremism, to pragmatic accommodationism.”

Armstrong, Karen
The Battle for God: Fundamentalism in Judaism, Christianity and Islam. An e-book.