It has long been noted that religion declines as a country rises from poverty5. In countries with a per-capita GDP equal to or below $2,000, the average religiosity rate is 95%. For rich countries, with per-capita incomes higher than $25,000, the rate is half as much - 47%. A few countries do not fit this trend, but, there are clear historical reasons for this. All four lower-income countries with low religiosity rates (Estonia, Russia, Belarus and Vietnam) were all subject to long-lasting restrictions against religion6.

Researchers Gregory Paul and Phil Zuckerman have approached this from an evolutionary and a sociological stance and both argue that belief in God is correlated with the level of difficulty of life in general - that "in countries where food is plentiful, health care is universal and housing is accessible, people believe less in God than in those countries where their lives are insecure"7. Sociologist of religion Professor Roderick Main writes that "where the technology and resources to mitigate major sufferings such as poverty and sickness exist, it is understandable that, for some, the appeal of religious consolations should diminish"8.

Dr Nigel Barber points out that these correlations have been investigated for almost a hundred years by anthropologists. "James Fraser proposed that scientific prediction and control of nature supplants religion as a means of controlling uncertainty in our lives. This hunch is supported by data showing that the more educated countries have higher levels of non-belief and there are strong correlations between atheism and intelligence" (2011)9. 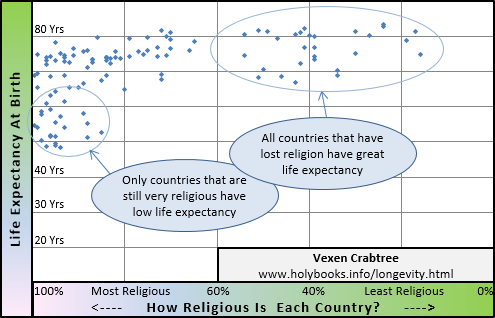 One of the way this trend shows itself is, aside from asking people how religious they are, counting how many of them actually attend weekly services (in those places where such things can be measured). The same trend is even clearer with this data:

But why? Firstly, it is certain that increases in life expectancy have many causes - mostly linked with overall national develepment. And also, that loss of religion is associated with multiple factors12. There's also a well-established theory that instability and unpredictability leads to individuals seeking greater sense of control of their lives through symbolic means. In other words: religion.

“Political scientists Pippa Norris and Ronald Inglehart, examining findings from the World Values Survey, attribute the pattern of higher religious commitment in poor places to stark differences in existential insecurity - that is, the degree of safety and security people feel as they go about their daily lives.

As their theory goes, in places where people face a constant threat of premature death due to hunger, war or disease, feelings of vulnerability tend to drive people to religion, which in turn provides hope and reduces anxiety. In countries with advanced economies, meanwhile, people are more likely to feel safe - in part because technology and infrastructure investments in these societies have helped people overcome many common health problems, cope with severe weather, and deal with other types of emergencies that can cause existential anxiety. Norris and Inglehart contend that people in these countries rely less on religion for emotional support or for explanations of the unknown.

When new cohorts of adults grow up in societies with greater existential security than their parents had - as may be the case in a country with improving economic conditions - young adults may drift away from religion, producing the age differences described in this report. By the same token, a decline in existential security within a country that falls into civil war or some other calamity could help to explain some of the exceptions - places where younger adults are more religious than their elders.”

And from the same article:

“In a separate study, the economist Jeanet Sinding Bentzen found that people living in places where earthquakes and other unpredictable natural disasters, such as tsunamis and floods, recently occurred are more religious than people living elsewhere.13”

The less in control we feel, the more religion suits our need9 for a symbolic victory in life. This future may take the form of a perfect afterlife (and maybe punishment for wrongdoers), or it may take the form of absolute dissolution where all the trials of life can be seen to have been steps towards annihilation - the former one being a typically "Western" solution adopted by Abrahamic religions whereas the latter is "Eastern" as adopted by Hinduism, Buddhism and Shinto.

The better people are educated, the less religious they are2. In countries where education is improving, younger people's uptake of religion is lower2,15,5. Mass education is one of forces that works to undermine religious thinking2 and studies have found that a general "connectedness with god" is associated with lower levels of education16.

The more mysterious the world is, the more appealing religious answers are9. But the more we know about the world, the more we understand, the less likely we are to accept religious answers. People with minimal education are the most religious17, and also, the more religious a person is, the less they are interested in science18. Those with secondary or higher-level education are less religious17. Those with a degree in science are less than half as likely to believe in God as the general populace, and top-level scientists are nine times less likely19. This correlation isn't new and was also observed in ancient Greece by Polybius (2nd century BCE) who said that those who educate themselves know that "all this talk about the gods and the underworld is a myth"20.

A large poll in 2010 found that those who know most about religion include atheists and agnostics21, with religionists knowing the least. The more you know about the world, and about religion, the more likely you are to understand and accept natural and scientific facts about the world rather than accept religious answers.