The text of Exodus was written and edited at various times between the 8th and 2nd century BCE1,2.

The first half is about the oppression of the portion of the Hebrews who had ended up in Egypt. It contains classic scenes such as the nine plagues. The second half is the unhistorical story of Moses' leading some of the Hebrews out of Egypt and their wonderings in the desert. Some authors believe that this pseudo-history is based on a real, partial, movement of Jews in the 13th century BCE3 but most think that the movement was of a small group of Hebrews in the 7th century BCE. Certainly, the migration did not leave any archaeological evidence (campsites, etc). Moses receives the Law from God on Mount Sinai, where he also receives the Ten Commandments.

The birth of Moses in chapter 2 is a retelling of an ancient pagan story: "The leaving of the baby in a basket on a river ties Moses to the unusual beginnings of several mythological or legendary heroes, including, for instance, Sargon of Akkad and Siegfried in Germany"4.

In Exodus, God itself is said to be an immoral monster, for example, because of its disagreement with the Pharaoh of Egypt, God kills all the firstborn in Egypt (chapter 12) - causing suffering and angst on a massive scale, mostly towards people who have nothing to do with the administration of Egypt, people who have no voice, and people who are themselves oppressed by the Pharaoh. However, as no other historians of the era (Egypt had many scribes) mention this calamitous event, we can be assured that it never happened. Perhaps it is a test, so that if the faithful believe the story, then, it means they do not trust in the morals of God. The text is also notable for its contradictions against other parts of the Bible, for example, Exodus 12 states a different 4th commandment to the one in Deut. 5.

1. The Pentateuch is the First 5 Books of the Bible: Genesis, Exodus, Leviticus, Numbers, Deuteronomy

The Five Books of Moses are Genesis, Exodus, Leviticus, Numbers and Deuteronomy. Together they are called the Pentateuch. It has been apparent for quite a while that these books were not written by Moses; for example, the text uses place names "that dated from hundreds of years after the time of Moses"5. Archaeological and historical evidence shows that these five books were primarily composed in the 7th century BCE. Finkelstein & Silberman explain that the evidence is that "the Deuteronomistic History was written in the days of King Josiah, to serve his religious ideology and territorial ambitions, and ... was finished and edited a few decades later in exile. ... The geographical and ethnic details of both the patriarchal origin stories and the Exodus liberation story bear the hallmarks of having been composed in the seventh century BCE"6. These five scrolls did not start out as being considered the holy word of god. They were modified and moulded over hundreds of years by various editors7 - although Christian tradition fiercely fought for them to be considered to be the works of Moses, this is clearly not the case. "The Pentateuch [was] considered to be canonical by the time of Ezra and Nehemiah in the fifth century BC"7.

The following series of quotations is taken from the digital version of "The Bible Unearthed" by Finkelstein & Silberman (2002)8: 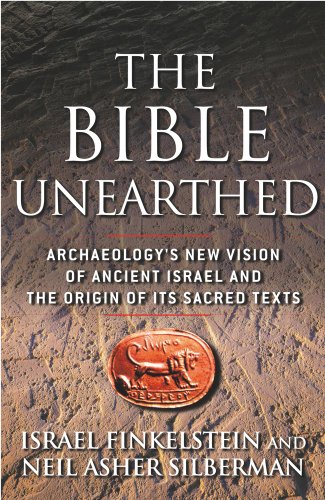 “digital location 1652-56: 'According to the Bible, when the children of Israel moved along the Transjordanian plateau they met and confronted resistance not only in Moab but also from the full-fledged states of Edom and Ammon. Yet we now know that the plateau of Transjordan was very sparsely inhabited in the Late Bronze Age. [...] To put it simply, archaeology has shown us that there were no kings of Edom there for the Israelites to meet. '

digital location 1657-61: 'The pattern should have become clear by now. Sites mentioned in the Exodus narrative are real. A few were well known and apparently occupied in much earlier periods and much later periods - after the kingdom of Judah was established, when the text of the biblical narrative was set down in writing for the first time. Unfortunately for those seeking a historical Exodus, they were unoccupied precisely at the time they reportedly played a role in the events of the wandering of the children of Israel in the wilderness. '

digital location 1674-83: 'The historical vagueness of the Exodus story includes the fact that there is no mention by name of any specific Egyptian New Kingdom monarch (while later biblical materials do mention pharaohs by their names, for example Shishak and Necho). The identification of Ramesses II as the pharaoh of the Exodus came as the result of modern scholarly assumptions based on the identification of the place-name Pi-Ramesses with Raamses (Exodus 1:11;12:37 ). '

digital location 1686-94: 'The Bible may reflect New Kingdom reality, but it might just as well reflect later conditions in the Iron Age, closer to the time when the Exodus narrative was put in writing. And that is precisely what the Egyptologist Donald Redford has suggested. The most evocative and consistent geographical details of the Exodus story come from the seventh century BCE , during the great era of prosperity of the kingdom of Judah - six centuries after the events of the Exodus were supposed to have taken place. Redford has shown just how many details in the Exodus narrative can be explained in this setting, which was also Egypt's last period of imperial power, under the rulers of the Twenty-sixth Dynasty. '

digital location 1744-59: 'A seventh century BCE background is also evident in some of the peculiar Egyptian names mentioned in the Joseph story. All four names - Zaphenath-paneah (the grand vizier of the pharaoh), Potiphar (a royal officer), Potiphera (a priest), and Asenath (Potiphera's daughter), though used occasionally in earlier periods of Egyptian history, achieve their greatest popularity in the seventh and sixth centuries BCE . An additional seemingly incidental detail seems to clinch the case for the biblical story having integrated many details from this specific period: the Egyptian fear of invasion from the east. Egypt was never invaded from that direction before the attacks by Assyria in the seventh century. Yet in the Joseph story, dramatic tension is heightened when he accuses his brothers, newly arrived from Canaan, of being spies who come to see the weakness of the land ( Genesis 42 : 9 ). And in the Exodus story, the pharaoh fears that the departing Israelites will collaborate with an enemy. These dramatic touches would make sense only after the great age of Egyptian power of the Ramesside period, against the background of the invasions of an Egypt greatly weakened by the Assyrians, Babylonians, and Persians in the seventh and sixth centuries. '

digital location 1760-62: 'Lastly, all the major places that play a role in the story of the wandering of the Israelites were inhabited in the seventh century; in some cases they were occupied only at that time. '

digital location 1768-75: 'The Bible describes how Moses sent emissaries from Kadesh-barnea to the king of Edom to ask permission to pass through his territory on the way to Canaan. The king of Edom refused to grant the permission and the Israelites had to bypass his land. According to the biblical narrative, then, there was a kingdom in Edom at that time. Archaeological investigations indicate that Edom reached statehood only under Assyrian auspices in the seventh century BCE . Before that period it was a sparsely settled fringe area inhabited mainly by pastoral nomads. No less important, Edom was destroyed by the Babylonians in the sixth century BCE, and sedentary activity there recovered only in Hellenistic times. '

digital location 1776-79: 'All these indications suggest that the Exodus narrative reached its final form during the time of the Twenty-sixth Dynasty, in the second half of the seventh and the first half of the sixth century BCE.”

Exodus chapter 1 (22 verses) - Children of Israel multiply in Egypt, are dreaded by new king of Egypt, made slaves by new king who tries to kill all baby boys10

Exodus chapter 3 (22 verses) - God calls Moses from burning bush to ask king of Egypt to let Israel go, to say 'I AM' has sent you; God will deliver Israel10

Exodus chapter 4 (31 verses) - The LORD gave Moses signs so that the people would listen. Moses was afraid, so the LORD sent his brother Aaron to speak for him.11

Exodus chapter 6 (30 verses) - God tells Moses He will deliver Israel, keep His covenant, asks him to speak with Pharaoh; descendants of Israel listed10

Exodus chapter 7 (25 verses) - Moses and Aaron went to Pharaoh. Aaron's staff became a snake, then the LORD turned the Nile to blood, but Pharaoh wouldn't listen.11

Exodus chapter 9 (35 verses) - The LORD sent a plague on the livestock of Egypt, then boils and then hail. Pharaoh begged for relief but then his heart was hardened.11

Exodus chapter 13 (22 verses) - The LORD told the Israelites to consecrate their firstborns to him. He guided them as a pillar of cloud by day and of fire by night.11

Exodus chapter 19 (25 verses) - The Israelites camped near the mountain in Sinai. The LORD spoke to Moses on the mountain and made his covenant with Israel.11

Exodus chapter 20 (26 verses) - I am the LORD your God. Honour the LORD above everything. Keep the Sabbath. Honour your parents. Don't do wrong to your neighbours.11

Exodus chapter 21 (36 verses) - If you buy a Hebrew slave he shall go free in the seventh year. Whoever kills shall be put to death. Whoever injures shall compensate.11

Exodus chapter 24 (18 verses) - The people said, "All that the LORD has spoken we will do", and they offered sacrifices. The LORD told Moses to stay on the mountain.11

Exodus chapter 25 (40 verses) - Tell the Israelites to make a sanctuary for me. Make an ark with a mercy seat and two cherubim. Make a table. Then make a lampstand.11

Exodus chapter 28 (43 verses) - Set apart Aaron and his sons to minister as priests. Make a breastplate, an ephod, a robe, a tunic, a turban and a sash for them.11

Exodus chapter 31 (18 verses) - I have filled Bezalel with the Spirit of God, with skill to make everything I have commanded. The seventh day is a Sabbath of rest.11

Exodus chapter 32 (35 verses) - While Moses was away the people worshipped a golden calf. Moses pleaded with the LORD for them, but then had three thousand killed.11

Exodus chapter 33 (23 verses) - Moses set up a tent of meeting. He said to the LORD, "Don't send us from here without your presence." The LORD passed near to Moses.11

Exodus chapter 35 (35 verses) - Moses told the Israelites to keep the Sabbath. He called for craftsmen to make the tabernacle. The people gave gifts for the work.11

Exodus chapter 36 (38 verses) - Children of Israel bring too many offerings for the sanctuary; construction of outer parts of sanctuary begins10

Exodus chapter 38 (31 verses) - Bezalel made the altar of burnt offering, the laver and the court. Ithamar kept an inventory of the gold, silver and bronze used.11