The Acts of the Apostles is a strangely named book, found after the Gospels in the New Testament. It was written between 60CE and around 100CE (85CE is a figure used by many scholars1), but, it is hard to date accurately. It is strangely named because two-thirds of the book (chapters 9-28) is about Paul, who wasn't an Apostle and most apostles have nothing said about them other than their name.

It claims to be written by a companion of Paul, but, the book itself wasn't written for a few decades after Paul's death. Also, the book is actually anonymous and its details about Paul are found to be erroneous in every detail that can actually be checked2. Early Christian communities considered Acts to be a forgery; the Cerinthians, Marcionists, Encratites, and Severians all rejected it3. John Chrysostom, the early Church Father and archbishop of Constantinople of the 4th-5th century CE, tells us that Acts (and its author) was unheard of throughout much of Christendom3, making it hard to believe that it was written by any valuable (or trustworthy) eye-witness.

This book claims to be written by a companion of Paul, but, the book itself wasn't written for a few decades after Paul's death, although this is perfectly possible for a (young) comrade of Paul with a good memory. There are some quite large differences in the very earliest manuscripts that we have of the Book of Acts, and it is clear it was being written-and-edited for some time before reaching its final form. 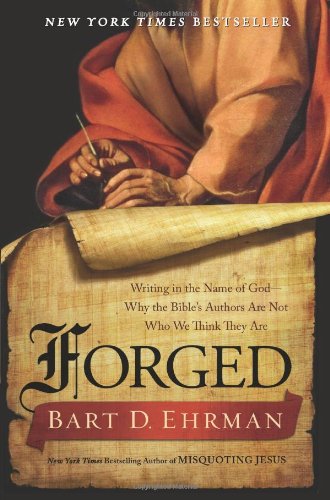 “Acts claims to be written by someone who was a companion of Paul. But given the numerous discrepancies between Paul's letters and book of Acts, that looks highly unlikely. The author of Acts never names himself, and to that extent he is writing anonymously. But church tradition, starting about a century after the book was written, attributed the book to someone named Luke [because] the Gospel of Luke and the book of Acts, both of them anonymous, were written by the same author.”

Theological concerns made academics over the years think that the author must have been a Gentile companion of Paul, rather than a Jewish one and Colossians 4:10-14 names 3 gentile companions of Paul: Epaphras, Demas and Luke the physician. But Demas abandoned Paul (2 Tim 2:10) and Epaphras founded a church in Colossae (Col. 1:5-7), but such a church is never mentioned in Acts and surely it would have been mentioned somewhere in Acts if the founder of that church was the one who wrote a Gospel and a second Book (of Acts). The assumption that, therefore, someone called Luke wrote it, "is found already in the late second-century church father Irenaeus [who] was writing a century after the book of Acts was produced [but is] the first surviving Christian author to make extensive reference to the book"2.

The problem is: The names in Colossians are unreliable because Colossians is a later forgery in the name of Paul, and not by Paul, and, there are too many errors about Paul in Acts for it to be the work of such a close and long-term travelling companion as Luke. "I've mentioned only three of these discrepancies. There are many others. They involve just about every aspect of the historical Paul. Paul's theology and preaching differ between Acts and the letters; other differences are in Paul's attitude toward pagans, his relationship to the Jewish law, his missionary strategy, and his itinerary. At just about every point where it is possible to check what Acts says about Paul with what Paul says about himself in his authentic letters, there are discrepancies. The conclusion is hard to escape that Acts was probably not written by one of Paul's traveling companions"2.

It is not just modern historians who doubt Acts. The very first Christian community, the Ebionites, also rejected it3 - although, they rejected anything and everything to do with Paul, so that doesn't tell us much about Acts in particular. More revealingly, a multitude of other early Christian communities also rejected it: the Cerinthians, Marcionists, Encratites, and Severians3.

John Chrysostom, the early Church Father and archbishop of Constantinople, tells us that Acts was unheard of throughout much of Christendom, which tells us that it, and its author, were not part of the original Christian communities that would have centred around any credible eyewitnesses.

Chrysostom, in a homily which he made upon the Acts of the Apostles, says that in his time, about the year 400, many people knew nothing either of the author or of the book.”

Acts 9:3-19 and 22:5-6 both report that Paul was made completely blind by the seizure and vision that he had, and then others had to take him by the hand afterwards (they took him to Damascus). Also, then, the dazed and confused Paul had to be told by a disciple what God wanted of him. But in Acts 26:12-20 a completely different account of Paul's conversion it told which is more dramatic. Instead of Paul falling to the floor, and the other people not hearing the voice that Paul heard, in this second version of Paul's conversion, everyone is knocked to the floor due to light suddenly emanating from heaven. Paul is not incapacitated at all by the vision, but immediately goes and preaches in Damascus, "and at Jerusalem, and throughout all the coasts of Judaea, and then to the Gentiles" (v.20). Likewise, in Galatians 1:12-13,15-17 Paul is not rendered blind, although that version is different from both main accounts given in Acts. There are certainly a lot of versions of this important story - some versions told by Paul, some versions told by others. Paul wrote letters, and organized churches... yet, the simple details of his life are unclear and befuddled. Also, he never met Jesus in person: the entire affair is made of smoke and mirrors.

4. Contradictions Between Acts and Galatians

When Paul converted from a persecutor of Christians into a believer in Jesus, many people continued not to trust him. He had to plead, and to have others speak on his behalf, in order for other believers to start to come to accept him. This level of unease amongst people around Paul could only be dismissed through one story: The story of how Paul converted to Christianity and what he done afterwards. Many of his actions after the conversion are told in by Paul in Galatians 1:11-12,17-24 and 2:1-21. Yet nearly every detail is communicated wrongly by the author of Acts - these are parts of the story that Paul must have explained to people over and over, in multiple locations, in multiple arguments. Yet the author of Luke & Acts was apparently not paying much attention! Bart Ehrman mentions a few of these contradictions, including ones surrounding the conversion story:

4.1. Who Did Paul Talk To After His Conversion?

In Galatians, after Paul is called by God, he speaks to no-one, and goes into Arabia before returning to Damascus (which is where he was, originally). He doesn't go to Jerusalem for 3 years, and aside from James, and he specifically tells us that he spoke to none of the other disciples. But in Acts he is on the road to Damascus and after his conversion Paul is, it says, blinded, and goes straight to the city to meet a disciple in Damascus called Ananias, who restores his sight. He then goes to Jerusalem to meet all of the disciples.

“There are other differences between Acts and Galatians that are even harder to reconcile. Here I'll mention just two. In Galatians Paul tries to convince his Gentile readers that it would be an enormous mistake if they were to become circumsized and begin following the Jewish law. He wants to insist that his understanding of this matter came directly from God [and not] from those who were apostles before him, Peter, James and the others. In fact, he stresses, after the vision of Christ that converted him, he did not even go to Jerusalem to talk with the apostles. He went away into Arabia, then back to Damascus, and did not go to Jerusalem for another three years (1:15-19). This makes the story of Paul's conversion in the book of Acts very interesting. Here we are told that Paul is blinded by his vision of Jesus on the road to Damascus; he then enters the city and regains his sight. And what's the very first thing he does when he leaves town? He makes a beeline straight to Jerusalem to see the apostles (Acts 9:1-26).

Moreover, whom does he see there? Paul insists in Galatians 1:18-19 that in his fifteen-day visit he saw only two people, Peter and James, the brother of Jesus [and Paul swears this is true by oath] (1:19-20). [In Acts] when Paul arrives in Jerusalem directly after being converted, he meets with apostles and spends some time among them - not just with Peter and James, but apparently with all of them (9:26-30).”

“Whereas Acts is quite clear that Peter realized, even before Paul did, that it was a good and right thing to share meals with Gentiles who did not keep kosher, in Galatians 2 this is precisely what Peter refuses to do when Jewish 'brothers' show up in town."”

5. Other Contradictions Against the Rest of the Bible

In fact, the Skeptics Annotated Bible lists 50 contradictions between Acts and other verses from the Bible, and although many of them are minor, the sum total of them all sheds some serious doubt on the fact-checking ability of the author of the Book of Acts. These contradictions are just the ones we know about, and it is easy to see that many other details (which, now, we can't cross-check) could be wrong too. On that basis, it is best to consider Luke and Acts to be faulty, and to be trusted less than other Biblical books.

Acts chapter 3 (26 verses) - Peter and John disrupt prayers at a Jewish Temple and restore a disable man's legs, then preach briefly about Jesus