The word Easter might have derived from a springtime Anglo-Saxon fertility goddess called Eastre (known as Eostre, in German and in Norse as Ostara), whose symbolism included the hare, the moon and eggs1. But that figure is disputed, and others say it derives from the word 'east', 'dawn'2 or from the Norse word for the spring season3. Easter is steeped in the symbolism of cycle of the sun, which rises in the East, and which in spring fondles the natural world to life. In the Northern Hemisphere, the spring equinox occurs on the 21st of March when the length of the day increases until it is equal with the length of the night4. The sun, growing in power, finally overtakes darkness, and this solar rebirth is celebrated in most ancient pagan religions, where agricultural life depended on the growth of spring. The other symbol of ancient solar superstition was the moon; and even today, Christians still celebrate their version of Easter on the first Sunday on or after the first Full Moon after the March equinox, tying Easter to its historical pagan roots. The images of Easter include two of the most ancient and universal symbols of birth, nature, fertility, life and rebirth: the egg and the rabbit5,6,7,8. We told anthropomorphized stories to explain why the sun, and nature, waxed and waned with the seasons, and thus Adonis, Attis, Dionysus, Osiris and many other Greek and Roman cults celebrated the death and rebirth of their gods at this time of year9. Since the very first centuries CE Christian apologists have had to defend themselves against accusations that the Jesus story was a retelling of pagan myths9. The beloved chocolate egg has now come to be the ubiquitous and central image of Easter and the Easter holidays10, and the Easter Bunny can often be seen delivering (and hiding) them, reminding us that Easter is a pagan, sun-worshipping festival.

1. The Symbols of Easter

2. The Etymological Meaning of Easter

There was once a fertility goddess, and a goddess of spring, called Eastre, also known as Eostre, in German as Oestra and in Norse as Ostara1, who "owned a hare in the moon which loved eggs and she was sometimes depicted as having the head of a hare"1. But that figure is disputed, and Steve Roud in "The English Year"12 says that "goddess or not, the English word 'Easter' is derived from the word 'east', and therefore probably from 'dawn'"2 and Eliade Mircea13 says "the English name Easter, like the German Ostern, probably derives from Eostur, the Norse word for the spring season, and not from Eostre, the name of an Anglo-Saxon goddess"3. Whatever the etymological history of the word, it is clear that the concept of the goddess, and the concept of the word, is steeped in the cycle of the sun, which rises in the East, and which in spring fondles the natural world to life. Easter is the quintessential pagan, sun-worshipping festival.

In some languages the name the name for Easter comes from the Greek word Pascha, derived from the Hebrew word Pesah (Passover)3. The Passover is a Jewish spring festival of harvest3.

3. The Christian Version of Easter14

Of all the annual calendar dates that the Christians adapted from the pagans and Jews, Easter was the first to settle down into a fixed pattern3. It became the most important of all Christian festivals15.

“The events surrounding Jesus' death and resurrection are remembered during Holy Week, which leads up to Easter Sunday.”

“Easter is the Christian equivalent of the Jewish Passover, a spring feast [which] may originally have been observed in conjunction with the Jewish Passover. [...] From at least the time of Tertullian (third century) the Easter Vigil (also called the Paschal Vigil) was the favored time for baptism, since the candidates for initiation mirrored the new life won by Christ from the darkness of death. [...]

Easter was fundamentally a nocturnal feast preceded by a fast of at least one day. [...] The symbolism of light became an important feature of this nocturnal festival. It was customary on the Saturday evening of the Easter Vigil to illuminate not only churches but entire towns and villages with lamps and torches. [...] From at least the end of the fourth century in Jerusalem... [...] In Northern European countries the use of special lights at Easter coincided with the custom of lighting bonfires on hilltops to celebrate the coming of spring; this is the origin of the Easter fire later kindled in Western Christian Easter Vigils. Large Easter candles also became the rule, and poems were composed in honor of them and thus of Christ the light, whom they symbolized. Such poems stem from as early as the fourth century. [...]

Among Easter foods the most significant is the Easter lamb, which is in many places the main dish of the Easter Sunday meal. Corresponding to the Passover lamb and to Christ, the Lamb of God, this dish has become a central symbol of Easter. Also popular among Europeans and Americans on Easter is ham, because the pig was considered a symbol of luck in pre-Christian European culture.”

"The Encyclopedia of Religion" by Eliade Mircea (1987)3

4. Why Did Christianity Struggle To Decide Which Date to Celebrate Easter On?14

Protestants and Roman Catholics celebrate Easter between March 23 and April 24 whilst Christian Orthodox churches use a different dating system15. Why is there such variance in the dates?

Easter is steeped in the symbolism of cycle of the sun, which rises in the East, and which in spring fondles the natural world to life. In the Northern Hemisphere, the spring equinox occurs on the 21st of March when the length of the day increases until it is equal with the length of the night4. The sun, growing in power, finally overtakes darkness, and this solar rebirth is celebrated in most ancient pagan religions, where agricultural life depended on the growth of spring. The other symbol of ancient solar superstition was the moon; and even today, Christians still celebrate their version of Easter on the first Sunday on or after the first Full Moon after the March equinox, tying Easter to its historical pagan roots.

But all this paganism worried many Christians and many pagan solar festivals were re-told in terms of the life of Jesus. Unfortunately there had never been a good idea in Christian communities as to when the major events in Jesus' life happened, as there were no eye witnesses. The records collected for the New Testament Canon were all unclear2, and none of the initial Christian communities knew the chronology either. Jesus' family nor first-hand contacts of the disciples were ever found. So, many local customs had been created to celebrate the important points in Jesus' life, and as a result, there was massive variance on the dates used to celebrate Easter. Jewish customs were adopted by some and the Sunday after the Jewish Passover was used (based on the timings of the moon); others continued using Pagan Easter celebration dates (based on the solstice - the sun's movements)16.

“Arguments about the correct method of calculation led to some of the bitterest controversies that Christianity has ever seen.”

“It may originally have been observed in conjunction with the Jewish Passover on the fourteenth day of the month Nisan. Gradually, however, it was observed everywhere on Sunday [and] the Council of Nicea (325) prescribed that Easter should always be celebrated on the first Sunday after the full moon following the spring equinox.”

"The Encyclopedia of Religion" by Eliade Mircea (1987)3

Initial solutions in the first few centuries of organized Christianity were quite chaotic and unpredictable. The Alexandrian bishop would send an annual letter to the churches in Egypt under his jurisdiction. "The purpose of these letters was to set the date of Easter, which was not established well in advance, as in our modern calendars, but was announced each year by the church authorities"17.

The Council of Nicea in the fourth century tried to resolve this by setting a uniform date for Easter, but, this caused tremendous arguments. Local customs were defended angrily against any attempt to harmonize them with other communities. The Western and Eastern Christian churches continue to celebrate Easter on different dates15 (and often, on different months) most years.

5. UK Observance of Christian Easter at Less Than 2%14 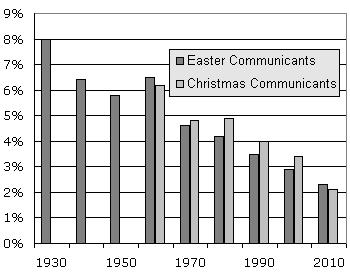 Data published by the Church of England shows that the percent of the total population of England and Wales involved in their services at Easter had nearly dropped to 2% in 2010.18

A UK law, the Easter Act of 1928 allowed government to specify a fixed date for Easter in order to prevent its unpredictability, but despite the Catholic church approving such a fixed date (in 1963), the UK government has never declared what that date is to be19. Some argue that a fixed date would bring sanity (and save money) with school timetables, business staff management (think of supermarkets, shiftworkers and delivery schedules), childcard costs and prevent various annoying consequences of the moveable date. But others argue that many churches wouldn't accept this solution - although it doesn't seem to matter, as even after the fixing of the secular Easter bank holiday date, Christians are of course free to celebrate Easter on whatever date they like.